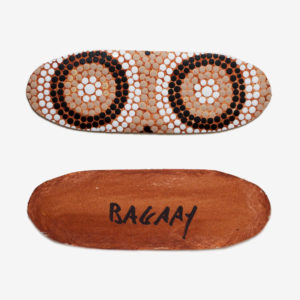 Traditional message sticks were crafted from wood and were generally small and easy to carry. They were carved or painted with symbols and decorative designs that conveyed messages and information. They had distinctive marks of the particular group or nation sending the message, as well as the relationship of the carrier to their group. This way it could be identified and authenticated by neighbouring groups, and by translators, when the message stick was taken long distances and passed from one tribe to another.

Message sticks have played an important role in the communication between Aboriginal groups across the Australian landscape for thousands of years and have survived as part of Aboriginal cultural tradition.

Thomas ‘Bagaay’ Avery is a descendant of the Gamilaroi tribe in northern NSW. His personal totem is the blue tongue lizard. Thomas’s ancestors were born at Bohena Creek Aboriginal Reserve, Narrabri. Thomas is a painter, designer and filmmaker using his unique insights to communicate his culture.

Material: Wood
Made in Australia